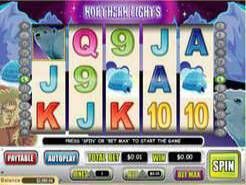 Play Now
Northern Lights Slots is a five-reel game with 25 pay lines. The theme of this slot game is the breathtaking Northern Lights that are seen so majestically in Alaska and other parts of the world. The Aurora Borealis is the main attraction. However, this is a winter themed slot game. Play with coin values from a penny up to ten dollars with a max wager of $250. There are two top jackpots, one is 6000 coins and another is 3000 coins. There are added features that include a bonus game, a wild symbol, and a scatter symbol. There are some 29 winning combinations in Northern Lights Slots, which was developed by WGS Technology. The symbols used in Northern Lights slots include Eskimos, Polar Bear, Aurora, Seal, Whale and Igloo. The Polar Bear is the wild symbol and the Aurora is the scatter symbol. Other symbols include the nine, ten and jack, to queen, king and ace. The Polar Bear symbol will replace all other symbols except the scatter symbol to create more winning combinations. The scatter Aurora symbol, when you get three, will trigger the second screen bonus round where you pick items to determine your prize.
Play Now